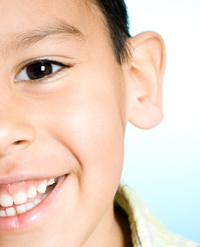 Ear surgery typically serves two functions: setting prominent ears back closer to the head, and reducing the size of large ears. Surgery may also be helpful for "lop ear," "cupped ear" and "shell ear," large or stretched earlobes, and lobes with large creases and wrinkles. Surgeons are also able to construct new ears for patients who are missing them from injury or other causes.

Although surgery for adults is available, the operation is most often performed on children aged four to 14 -- ears are almost fully grown by age four, and early surgery can prevent a child from being teased in school.

Otoplasty lasts from two to three hours and may be performed in a hospital, office-based facility or an outpatient surgery center. General anesthesia is recommended for very young patients, while local anesthesia and a sedative are used for older children and adults.

During surgery, a small incision is made behind the ear, revealing the cartilage which is then sculpted, bent into its new position and stitched into place. In some types of otoplasty skin is removed but the cartilage is left in one piece and merely bent back on itself for a smaller-looking ear. A bandage is wrapped around the head to ensure the new positioning. To achieve better balance, both ears may be operated on even if only one has a problem.

Patients of all ages usually feel back to normal after a few hours, although the ears may ache or throb for a few days. Bandages are replaced with a surgical dressing after a few days, and stitches are removed within the week. Adults often return to work in five days and children may return to school in seven. Otoplasty leaves a faint scar on each ear that fades with time.

You should not expect your new ears to match exactly; even normal, natural ears are not identical.

Complications are rare and usually minor, but may include blood clots and cartilage infection (usually treatable with antibiotics but occasionally requiring surgery).